Sorry I’m not sorry for dropping off the grid last week.  I’ve just been…. Watching my life spiral around the porcelain bowl?  I think I’m depressed and I think I’ve been depressed ever since I moved to the big city, but I have been able to mask that depression with Wendys, not any more.

You see friends, I gave up fast food for lent (47 days). Why? I don’t know.  I’m not Catholic and it made me so happy before. I did it to prove to everyone that I could.  Everyone that I’ve told that I’d be giving up fast food for lent has said they didn’t think I could do it, even High School Crush, and he doesn’t even freaking know about my natural-cut-sea-salt fry dependency.

But I digress, here we are on day 15 and I’m still going strong.  I really haven’t had the urge to swing in my favorite fast food joint for a spicy chick & fries (until I started talking about it just now), I’ve kept my fridge stocked with snacks and foods that I like, that are also easy to prepare, and I’m pretty proud of myself.

In typical American fashion, when this is all said and done it will be the longest I’ve ever gone without eating fast food.  I’m sure my arteries will be doing a happy dance, but my stomach is hungry.  Healthy food definitely does not fill you up like a nice greased up burger and fries does.  Don’t get me wrong here, I wasn’t eating at Wendalls every day, it was like twice a week MAYBE 3 times if something extra shitty happened and I got it for myself as a reward for not slapping someone in the face at work.

Sunday afternoon I was lying in bed being bored, day dreaming about Wendy, when Anth called me up and asked if I wanted anything from Buffalo Wild Wings.  Now, B-dubs isn’t fast food, but I am also counting carry out.  Let’s be honest here, I don’t eat food from a restaurant unless I’m eating it in my bed, which is not a good look for anyone.  So I declined the offer.  When I heard him come back I pranced my happy ass downstairs to call him out.  He gave up fried foods for lent, and as you know, wing dings are fried.  Yeppers, busted! I walked in the kitchen and started wagging my finger at him, “What do you think you’re doing!? Cheating on God!!!!” Just when I was about to make a lap around the winners circle because I made it longer than him, he told me about the out.

Apparently, many years ago, some weak cheater decided that Sundays are a free day.  God turns his back on Sunday’s and if you do whatever you gave up then it’s totally cool in God’s eyes because Sunday is the day of rest for his homies.  Of course it was tempting, but I’m not going to do this half assed.  I don’t want to be like yeah I totally gave up fast food for 47 days and then have a disclaimer of “except on Sunday’s because that cheater said they don’t count.”  That’s stupid.

Anywho, mark your calendars, on April 9th I will be face deep in a bucket o Wendys.  Seriously it’s going to be the greatest day of my life.

So as you all read in Lucky’s post yesterday I will be headed to her neck of the woods come tomorrow night.  That means don’t expect to hear out of either of us for the next 5 days. Sorry guys! It’s SB2K12!

In other news, I have 2 crushes and I don’t know what to do with myself. I won’t kid you, it’s making my life pretty exciting because every time my phone goes off it’s one of them.  As I’m sure you could’ve guessed High School Crush is one, but the other is a guy I met a few weeks ago.

Chuck and Gigi came up for a visit a few weekends ago, and when they arrived at my apartment low and behold they had 3 guys with them that I had no idea were coming.  It wasn’t really a huge inconvienence, my apartment is massive so we had plenty of space, I just would have liked to have been able to give Anth and Doogie a heads up about all these people crashing at our place.

Anyway, I told Lucky they were all non-hot nerds, but I’ve kind of taken a liking to one of them.  He’s actually pretty hot (although smaller than what I usually go for) (see: my #1 goal in life: 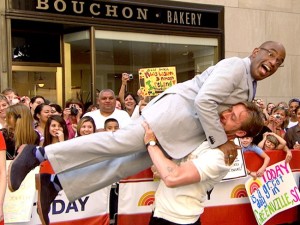 Now, I’m no Al Roeker but I’d like to find a guy that can do this with me.  It’s just hot.  And the fact that my hubs-to-be RyGos can do this with a heafty man such as Big Al, well it’s a big turn on.  But when said future boyfriend and I try this at home I don’t want to be worried he’s going to drop me on my money maker, hence the reason why I don’t normally date small guys.

But this guy is really funny, so I looked passed him not being 6’2 with bulging arm muscles and took the fact that he made me laugh so hard that beer came out of my nose as a good sign.  Not too much has happened though, we’ve texted a little here an there and he’s asked when I’m going to come visit them for round 2.  Which is more than I can say for High School Crush.  Things with him are…the same.  I get that he’s not going to call me up and confess his undying love for me, but the progress of the relationship is going about as slow as ….. I can’t even think of anything that moves this slow.

I’ve been trying to take the slow pace as a good thing, because usually things go too fast and then it all blows up, but it’s frustrating because all I want to do is hang out with the guy more than once every 6 weeks.

Damn you big city and your being far away, damn you!